My grandfather is buying a compressor from a friend of his, and they are meeting in Flagstaff. He needs my help to move the thing from one truck to the other. So I’m going to Flagstaff with my grandparents tomorrow.

My sister is coming up to run the store for the day; hopefully people will come in with money, looking to buy. We hardly had a person come in after lunch today. I spent some time marking a few more prices on things for her. She worries about making up prices for things on the spur of the moment. So do I, frankly, but I’m getting used to it.

My father and brother are also coming up tomorrow. I don’t know what they’ll do, exactly. There are rumblings of my brother accompanying us to Flagstaff, but since we’re going in the truck, I don’t think there’ll be room. Unless grandpa thinks it’s safe for one o fus to ride in back. I never know.

Feeling a bit better today. Going to go to bed early again. See about trying to be well by the time the convention rolls around. I need to figure out if there’s a way for me to pack a couple of paintings to safely check them with the airline. I wanted to have three particular paintings on-hand. One is ‘please’; I wanted to have it on hand because I’ll be signing and handing out mini-prints of it, and maybe someone there will want to buy the real thing. The other two are the two online-comic-inspired paintings. I was trying to do for comics something new, stylizing and portraitizing particular online comics characters in a pair of paintings that are interesting on their own and that work together side by side as well. One of them I have recently lost the rights to create, so while I will (perhaps temporarily) have a photo of the painting as I “wanted” it to be here on the site, I will shortly be permanently defacing it in a way that calls out the ridiculousness of the person who owns the rights to the character. There will be photos of that online soon, as well. 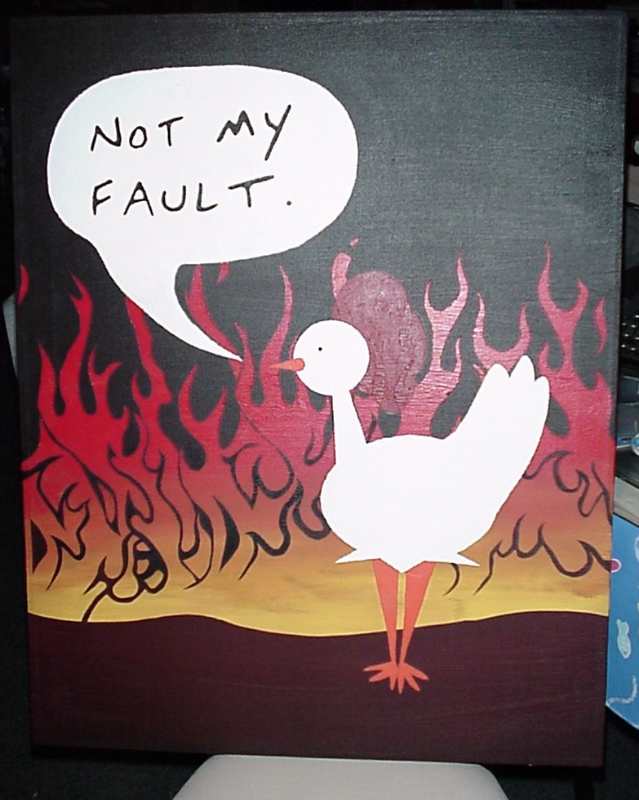