I have now created a work of art where the subject is freedom of expression itself, and the boundaries of inspiration. I selected a fellow artist whom I know has created and profited from the creation of derivative art in the past, but who was now making enough money from his creations that his attitude about derivative works had changed. I contacted him, surreptitiously asking for license to create a unique stylized portrait of one of his characters, a la Andy Warhol’s portraits of celebrities, knowing I would be refused. I was refused. I offered him the painting itself, I offered him 100% of the proceeds from the potential sale of the painting, and I tried reasonably negotiating with him as though I believed it would do any good. It did not; he refused all forms of negotiation or compromise as I had expected he would. He even refered to himself as being a ‘pain in the ass’ about the whole thing.

I then proceeded with my original vision of the painting, which was to make it appear that a derivative work created in good faith and a playful spirit had been forced to be ‘un-created’ or defaced because the originator of the idea was being unreasonable and restricting my freedom of expression. Thus, yesterday I got to the point where it appeared to be simply a partially derivative work (would you know what the subject was if I did not spell it out?), and I contacted the original creator one last time, to give him one last chance to allow the work, or accept the offer of 100% of the proceeds, or to work something out. Again he refused to negotiate, this time saying (this is a direct quote) “I don’t give a shit what you do with the painting, but I don’t want it, I don’t want the proceeds from its sale…” thus giving me excellent ground should he try to take legal action againt my now entirely unactionable position. Thanks, man.

Anyway, the final work really doesn’t depict any character or creation of his, and any part of it that resembles a creation of his is coincidental to my desire to have a factual basis for the actual point of the peice. Which is that if I had not coerced the above quote out of him, and had actually created something that had more than a vague resemblance to a creation of his, I could have faced legal action.

For painting a picture of a chicken.

There is something wrong with the way copyright law is handled in America, and it is not simply with the ridiculous term of each copyright (now 90 years beyond the death of the creator), but also in the way creators have come to behave with regards to their creations. There is no way this one painting could topple the ’empire’ the original creator is building around the actual character he believes it was intended to depict, let alone degrade the value of the character. (At my current going rate for a painting of this size and complexity, I could easily get several hundred dollars, while he gives away an infinite number of depictions of the character in question on his website every day for free.) Yet the creator feels so compelled to totally control the character in question that when anything is created even vaguely or coincidentally resmbling one of his creations, he reacts by trying to stomp it out. If he were to maintain this attitude about his work, it would extend 90 years beyond his death, which itself may be 90 years away, and anyone wanting to draw, paint, or otherwise depict a talking chicken would have to either wait a century or two or proceed with their creation with the fear that they may next be targeted by this creator, who has apparently copyrighted the idea of the talking chicken.

I understand that there should be a certain level of protection for creators, as I am myself a creator, but the current laws and attitudes are too far gone. I certainly don’t need protection of my works more than a year after my death, and corporations (non-entities, as far as I am concerned) should only be allowed use of individual creators’ copyrights for as long as the individual agrees, and for one year beyond the term of their life. Not longer, and not without the permission of the actual person or persons who created the work. Copyright law should not be able to stop individual creators from expressing themselves, but only to stop those who make money from copyright violations from not giving a fair share of any profits to the copyright holder, up to 100% of the profits. Copyright protections are supposed to be there to allow the people who come up with the ideas to make the money off them without having to worry about not getting their fair share if/when someone else uses their idea.

Personally, if I created something that inspired someone to create a new something that had grown out of my own creation, and that it was so popular or valuable that they were able to make money by its sale, I would probably want to congratulate them, and perhaps collaborate with them on future works. In a few years when I’m making more money off this stuff and someone tries to make money from something derivative, see if I don’t hold to my word. It isn’t about this situation, and it isn’t just about ‘inspired’ or ‘derivative’ works, it’s about the whole copyright issue. It’s about the fools in the music industry who believe people getting free copies of their music over the internet is stealing, but will gladly give away free copies of the same music over the radio and in stores on free promotional CDs and consider it ‘advertising’. It’s about the fact that Mickey Mouse is 70 years old and I’m still not allowed to draw him without permission I could never afford to get. It’s about the fact that all the ‘fan art’ anyone has ever drawn (usually among the first things any artist ever draws) could be stopped at any moment by whomever owns the individual copyrights on the inspiring images and characters being depicted.

It’s about freedom of expression.

I give you my new painting (I will have a better photo online next week), which will be available for sale online at Modern Evil and in person at the San Diego Comic-Con 2003 next week, 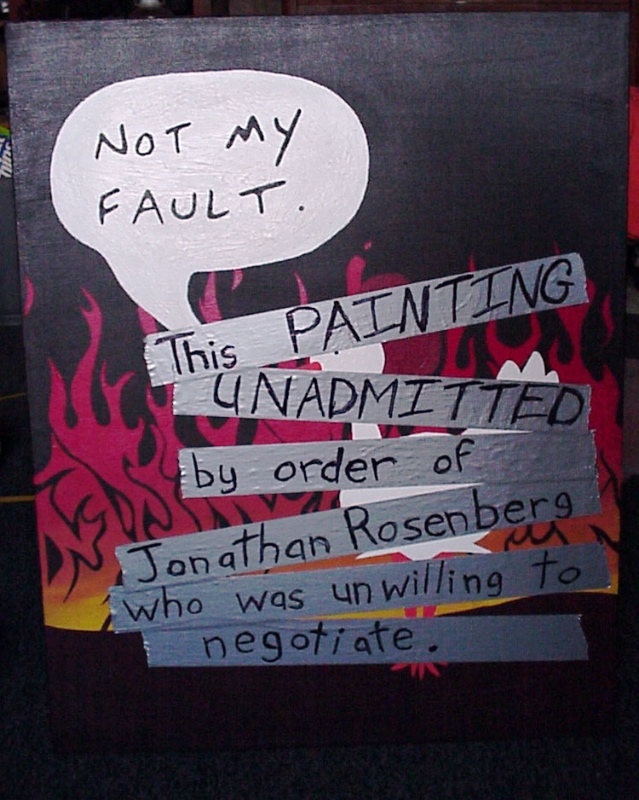 6 thoughts on “on my new painting…”