Ah, having a phone on-hand with me, literally everywhere I go.

So, first today, while it was still raining, I went out and pulled some weeds. There’s a particular type of weed my grandfather is allergic to, so (unless other weeds are in the way of my getting to the weeds I am after) I am seeking out and only pulling these weeds. To save time and effort, and to try to get all of this type of weed removed before they go to seed. Or even blossom, really. Anyway, pictured at right is a leaf from one of these plants, with it’s distinctive five-point leaves. I tried to get a good image of the bud of one that was about to bloom, but it came out blurry. Anyway, while I do not seem to be allergic to this plant, I have been pulling it for several days and my hands are quite unhappy with the activity. So, I wanted to ask any burgeoning horticulturalists out there if they happened to know what the name of this particular plant species is. So that I can have a name for the object of my attentions. A link to a website with a photo and description would be neat, too, if you could find one. I just don’t know where to start. 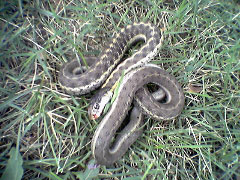 Next up is a picture of a snake I accidentally ran over with the lawnmower. An hour or so after the rain let up, the grass seemed dry enough to mow, so I proceeded to mow. Which took a while. Just before I was done, I accidentally ran over the snake, pictured at left. I noticed it after I passed over it with the lawn mower and before I stepped on it. I immediately shut off the lawn mower and crouched down for a closer look. The snake was moving a bit at first, but then wiggled slower and slower and twisted itself up slower and slower and stopped. For a while, I thought it might be dead. There was a spot of red on its face, and as it was slowing down, I saw that red blossom out into a copious amount of blood (well, to scale, it seemed copious; it was probably only a couple of drops). After the snake was still for a moment or two, I reached down and grabbed it just behind its head and picked it up to take a closer look. I immediately knew it was still alive. I supported the rest of its body with my left hand, and it sure held on pretty good, twisting up around my hand. It had both its eyes, it could open and close its mouth, and it could stick out its tongue pretty good. It seemed to have stopped bleeding profusely, too. I set it down, it wriggled around some more, into the configuration you see, and stopped again. I photographed it. I tried to offer it live bugs to eat, and I guess I selected the wrong sort of bugs, because it turned and slithered away. I tried a different kind o fbug, and I guess that one was wholly offensive, because it slither away quite fast indeed, right under the house, which I hope is where it lives, rather than where it went to die. Anyway, same thing applies. I don’t know much about snakes, but maybe you do. Tell me what kind of snake that was, and whether you think it’ll be fine. Silly thing probably just shouldn’t have stuck it’s head up under the mower; the rest of it’s body was totally unharmed. (As far as I could tell under close inspection.) Again, a link to a webpage with a photo and description of this type of snake would be appreciated. Thanks. 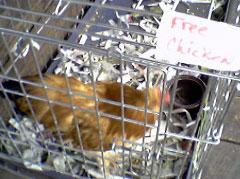 Finally, we move on from a weed and a snake to a chicken. I don’t have much to say about this chicken, except that yes, they are giving away free chickens. They used to give out free kittens from that same cage, and they went like hotcakes. If you know how and are interested in slaughtering and preparing a live chicken for food (or if for some reason you want a fully grown chicken for a pet) it’s available right here in Pine at the Old Settler’s Shops, 3972 N. Highway 87. If you don’t see the chicken on the porch, ask Gary or Becky in the 1882 log cabin; last time I was at their place they had quite a few chickens. Some were polydactyl. Now, I don’t care what kind of chicken this is, but if you can give some sort of understanding about people who, when visiting a small town in the Rim Country, and an antiques/collectibles store in that small town, one would take home a live chicken, I would be grateful.

Not much else happened today. Well, I mailed off that Perspective drawing to my corespondence school this morning. That’s good. I’m a little behind on some of the things from the chart, a little ahead on others. Nothing to be too worried about. That Mouse Project interactive thing-a-ma-whatsit took up a lot of time I simply hadn’t budgeted for. I’ll have to make up the difference some other day. I’m beginning to have ideas for screenplays I could write, and I have to do this novel first. I need to have creative ideas about the novel, and do the screenplays later.