I’ve been working on that bigger project, featuring GWB, for a while now, and it’s a while yet to go before it’s done. But to test some of the techniques I’ll be using on that, I decided to do a smaller piece. Thus, Screw Moo: 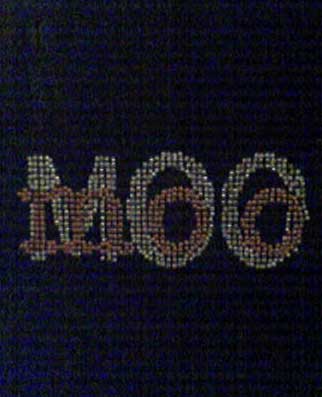 (click to see more images, or to buy “Screw Moo”)

It began as simple plywood. Aha! But then an artist got his hands on it, and it was transformed. Nearly seven hundred holes were drilled into a careful pattern in a carefully selected area of the wood, based on a series of computer simulations and artistic interpretation thereof. The wood was then sanded and prepared and spray-painted black. Three hundred and thirty three screws were carefully punched through sheets of paper so that they would all be facing head up, and their heads were spray-painted red. After the paint had dried sufficiently, the long and tedious process of carefully screwing hundreds of tiny screws into an intricately planned two-color design began. Last night, around four in the AM, the final screws were in place, and the piece was signed, dated and serialized.

Seriously though, I’m glad there’s only one color of screw to deal with in the GWB project. It makes the whole process a little easier, since I don’t have to refer constantly to diagrams and guides to determine where I am and where I am not supposed to put one type of screw or the other. Also, since it’s about 48″x32″, although it will be a lot more screwing, the end result should be more satisfying. Look for it in around a month. I hope.

Anyway, enjoy “Screw Moo” – a proof of concept, from which I gained some valuable experience.