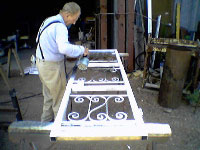 So, every day I’m up here and grandpa’s up here and feeling well, we work on at least one project. Yesterday we worked on getting the metal security door and windows that just got finished being built primed with white paint. As you can see on the right, my grandfather did the actual painting. I just help out generally, and do all the heavy lifting. IE: carrying the horses around and into place, setting the metal door and windows on them, carrying around the paint and tools and hooking up the air and whatever else. See, my grandfather likes to do as much by himself as he can. Since he’s recovering from bone cancer, is anemic due to the chemotherapy, and 76 years old anyway, he does tend to run out of strength and energy, and he knows he will sooner if he doesn’t have my help, so he lets me do parts of things. But he seems really to want to do it himself, and most of the time he does the most ‘important’ things, like the actual painting here, or the welding below.

See, while yesterday’s work was cut short because grandpa ran out of energy and then it started raining on our metaphorical parade, today it didn’t start raining until after supper. So first we moved the big saw from where one big pile of wood used to be to where another big pile of wood still is. I’m sure we’ll get to work on cutting it into firewood soon enough. Note: the saw has two major components, the smaller of which is almost heavier than my grandfather and I could lift together. Oh, and then driving stakes into the ground to hold it in place when it’s running later was fun, too. Especially for my wrists and arm muscles! Then grandpa had me shovel up the mess that remained under where we’d been working before. Except that since someone else had been using the same spot without cleaning up for a year or more before that, I filled four 55-gallon garbage barrels with what I was scooping up there. The stuff was so heavy it broke one of the barrels’ handles off, and I threw that away, too. 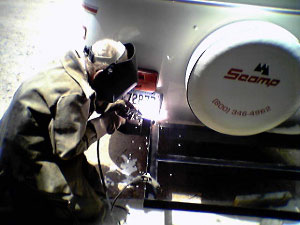 Then, after grandpa had a break (while I was shoveling and lifting in the sun), we moved the Scamp around to the warehouse, where we proceeded to attach a rack to the back of the Scamp to support a generator & stuff. The image on the left shows grandpa welding the rack into place. I helped with getting it bolted onto the Scamp, and with gathering tools, moving the wire-feed welder, etc… but he did the bulk of it, drilling the holes and tightening the bolts and then, of course, doing the actual welding. (As I have mentioned, an eye problem of mine makes welding nye impossible for me anyway.) There was still plenty of lifting to do, so by the end of this I was pretty tired.

Oh, and then later, and I’m sorry I don’t have any pictures of this, but … I’m sure you’ll understand… Later, upon grandfather’s instructions, and after it had rained for a couple of hours, I went out into the rain. To water the flowerbeds. Man, if those flowerbeds weren’t the epitome of wet when, after an hour of work, I was done with them. Woo! Watering in the rain.