Well, I’m in Phoenix again. Strangely, I’m in Phoenix for the weekend. Got in last night and watched Willard (a visually stunning movie with powerful and visceral acting by the great Crispin Glover) with Angela. I’m here today, tomorrow, and will be leaving Sunday morning… sortof. Anyway, if you email me at teel@modernevil.com, I’ll get your email … on Sunday night, probably. I WILL be checking my hotmail account, though, so if you need to send me a message you could send it there. OR just call me. My phone works better than usual when I’m in Phoenix, since I’m actually on AT&T’s network instead of Verizon’s. If you need to contact me and have neither my hotmail address nor my phone number, try commenting here with a way for me to contact you back, OR kill yourself. Your choice.

Anyway, I’ve just updated my Virtual Webcam shot with a shot of my empty room… well, because I’m not there. So that’s probably what it looks like right now. (Maybe a smidge cleaner…) I’ve been working pretty furiously all week on a painting I’m selling to someone in Phoenix this weekend (I’d say who, but I don’t know if the buyer wants everyone to know they’re the buyer or not), and I may upload photos of it in process. Since I have ready access to a digital camera now, I’m thinking of photographing much of my work in stages… make a record of my process… and upload it in the Art section of Modern Evil. Regardless, images of this sold painting will appear there at some point. I just have to take the time to write the code and upload the images.

Ooh. Here’s a preview of that painting: 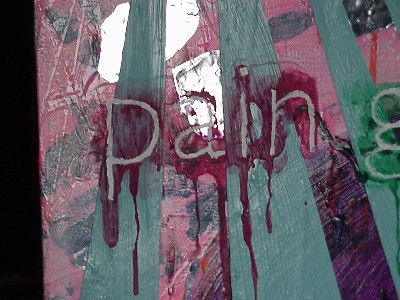 Just a little portion of the whole thing, of course.

Anway, I’m gonna go ignore the war for a little while longer. Maybe take a shower or something good like that. Then later, I’ll go watch the Animatrix short film … I hear they’ve attached some adaptation of a Stephen King novel to it, so you know … a little extra for my money. (Gha. The Matrix has me. I saw the original in theatres at least twice, I bought the DVD, I’m going to see each of the other two movies at least twice in the theatres, plus buy their DVDs, plus I’m going to buy Enter the Matrix (if I can get my hands on a copy) when it’s released on the same day as The Matrix Reloaded, and today I’m going to pay $6 to watch a 9-minute short from The Animatrix, which I will also be buying on DVD in June (or July, I don’t recall when it comes out). The Matrix has my wallet, anyway. For all I know, there’ll be another $50 game tied into The Matrix Revolutions. Gha. Still, I doubt I’ll feel I’ve wasted my money…)