First, I want to start with an: Oops! Apparently the process of buying, moving into, and settling into a new home is … all-consuming. It consumed all our money, all our time, and all my attention last month. In fact, March 2013 is now one of only two months since March 2001 (when I actually started this blog) where I didn’t create at least one post here. Oops. Sorry.

Second: Hey! We bought a house! I’m now a homeowner! Mandy and I found a nice place to live in downtown Phoenix, within walking distance of downtown and the arts district. It has room for us to dedicate two entire rooms to my creative endeavors (one is to be a dedicated art studio, the other an office and writing space) and still have plenty of other space for the rest of our life & stuff. (Oh. My. Word… We own so much stuff!) As I posted before, this entirely changes our financial situation re: debt, but not in too terrible a way. We can still afford everything which was in our budget before the move, but we have a lot “more debt” and we can’t pay our highest-interest debts off as quickly as we were doing before. I’ll make an update on that, soon-ish. Maybe I’ll also put together a photos post, so you can see what we just spent $100k on. Probably in early May. 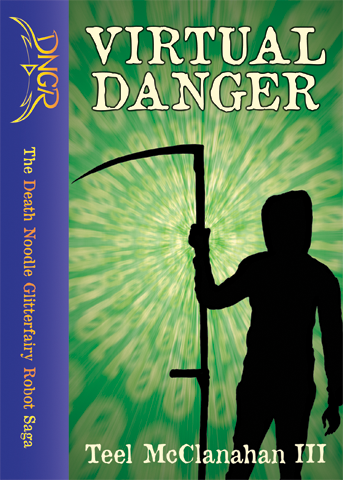 Finally, the main subject of this post: Virtual Danger, a novel in The Death Noodle Glitterfairy Robot Saga—I’m doing a little fundraiser to try to cover the cost of its publication in advance. This is, in fact, directly related to item #2, above, where we bought a house on short notice and used all our money up; the profits I had from last year’s Never Let the Right One Go sales… well, I seem to have lent them to myself in order to make the down payment & get the house furnished. (I fully intend, and tracked, all the savings balances (tires, computer, business, et cetera) I was dipping into, so that we can get back to where we were a couple of months ago… eventually. Maybe by Christmas.) So I can sortof afford to get Virtual Danger published/printed so I can sell it at Phoenix Comicon, but we’re cutting pretty close to the bone, now, and if anything else needs work, or if something goes wrong, or needs repair, before I can get some of that savings built back up … putting $300 from my own pocket toward a book I’m not sure will make any money at PHXCC’13 is … scary. If I need to, I’ll do it, but it’s scary.

What would be less scary, which you can help with, is if enough people pre-ordered the book (in its various forms and formats) to cover part or all of those costs before I send the book to the printer. In order to have the books printed and delivered to me in time to sell at PHXCC’13, near the end of May, I have to place the order during the first week of May—the fundraiser’s deadline is Saturday, 5/4/2013 at 11:59pm MST, and if all goes well I’ll submit all the files to Lightning Source on Sunday, 5/5/2013 and they’ll start working on them first thing Monday morning. That gives me just over 3 weeks to raise $300. It’ll either be relatively easy or painfully, stressfully unsuccessful.

I’ve already written a lot about it on the fundraiser page (almost certainly too many words, right?), but I’ve decided to try doing the whole thing my own way, and on my own (without Kickstarter/IndieGoGo/whoever) this time. I took away the all-or-nothing, and I took away the wait-for-the-deadline both on the “making a payment” and “getting rewards” sides of the transaction; you pay now, and you get your copy of the eBook now. (And unlike a lot of projects I see people complaining about, you don’t wait several months or years for delivery of the final product; everything will be in hand by Memorial Day weekend, and either picked up in person at Phoenix Comicon 2013 or shipped the next week, less than a month after the end of fundraising.) I coded most everything there myself (I did steal and heavily re-write someone else’s embeddable widget), and I’ll have to manually/hand-update the page & widget every day and/or when I make sales.

All the usual suspects are there: The eBook, a paperback, and the option to get the audiobook on CDs. Additionally I’ve included the ‘$300+ to commission a new painting’ option which has been so popular with my past fundraisers, and something a little weird and mostly new to me: T-Shirts. The new book is part of a (otherwise nonexistent) series of books called The Death Noodle Glitterfairy Robot Saga, and the series is about the adventures and misadventures of the world-famous band, DNGR, which is the three protagonists, Death Noodle, Glitterfairy, and Robot. DNGR, which sounds like “danger” when you say it aloud, is the name of the band, the name they go by as a force for good (think of: Avengers, DNGR, and Justice League), and of course they must have a logo, the sort of thing you can imagine their fans wanting to get on T-Shirts. I designed it as part of the “series branding” to go on the book’s cover, and have been considering getting one to wear at PHXCC’13. 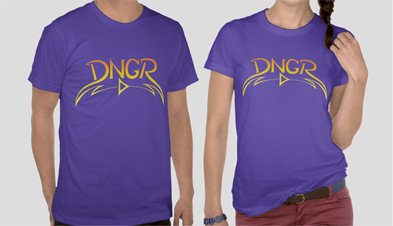 So I looked at my options, and for a small number of shirts (say, one for me and one or two for my biggest fans) my best option is Zazzle, but the shirts cost about $30/each with shipping. If more than a dozen people are interested in wearing a DNGR logo T-Shirt I can get them screen printed for a little over half that price. If I get them screen printed, I’ll order a few extra copies and have the extras for sale at PHXCC’13. Otherwise, I suppose I could make the design available for purchase via Zazzle after the fundraiser is over… though seriously, $30+/shirt. Unless a lot of people want them, the options which include shirts may SEEM to help a lot, but since the shirts cost me so much to have printed that they just disproportionately end up increasing the total “raised”.

(Here’s some example math: If 20 people bought in at the $15 level, I get $300 and can put it all toward books, since that’s all I’ll be delivering, and I’ll be able to afford the 20 I’ll be shipping out as well as 30 more copies to sell for additional profit. Yay! If just 8 people bought in at the $40 level (eBook & shirt), I get $320 but the first $240 (or so) has to go straight to Zazzle to get those 8 shirts printed, leaving just $80 toward the $300 needed to get books printed! This is part of why some Kickstarter projects, especially those which have unexpected levels of “success” frequently find themselves in trouble because they “underestimated the cost of fulfilling rewards”; it frequently relates to incorrectly estimating what proportions of backers will be interested in various rewards. There is a natural tendency to believe that, for example, most people will want the eBook and/or the paperback from my fundraiser and to base goals on that premise; to be totally safe, I ought to have raised either/both the goal and the price of T-Shirt-including levels until all possible goal-meeting levels of funding would actually leave enough money to fund printing the books; in this case that means something in the neighborhood of doubling both: A $600 goal and $60 for the cheapest T-Shirt tier. This especially applies in an all-or-nothing fundraiser. (Alternatively, by increasing the goal to $500 and leaving the T-Shirt tier prices alone, it takes 13 ebook+shirt orders to hit the goal, which is enough to halve the cost of the shirts & leave just over $300 for the books.) Imagine you thought you needed to raise half a million dollars to develop a video game, and that you imagined most people would back at a level where you needed simply deliver the game—but then a few thousand people order T-Shirts, too, and suddenly your game-development budget is $100k+ lower than you expected, even though you technically hit your goal.)

Anyway. DNGR logo T-shirts. DNGR books. Stretch goals; you should go check out the stretch goals. And did I mention the whole DNGR project has been, for at least a year, intended to be one with multiple creators involved? Check out the main Virtual Danger page at modernevil.com. The book is being published under a Creative Commons Attribution 3.0 license, which really has just the one restriction: Acknowledge that I created Virtual Danger / DNGR. None of the restrictions I normally use, like “NonCommercial” which would mean you couldn’t try to make money from anything you made in the DNGR universe, or “Share Alike” which would mean you’d have to release your own DNGR stuff under the same CC license; almost no restrictions at all. Write a book or a song in the DNGR universe? Great. Sell it? Wonderful! Put it out under copyright with all rights reserved, rather than a CC license? Fine. Heck, you could even print and sell your own copies of Virtual Danger, if you wanted to, and you wouldn’t owe me a penny, as long as you leave my name on it.

I’ve already got a couple musicians working on music— “covers” of songs “by DNGR”, which I’ll be linking to, soon. I’ve already spoken to several other authors about writing books or stories in the DNGR universe. I obviously can’t control what other people actually do (I can hardly control myself, at times), but I would really love to see people create more stories, more songs, art, and anything else inspired by The Death Noodle Glitterfairy Robot Saga.

Plus, unlike some crowdsourcing/fundraisers, the CC BY license isn’t dependent on hitting the fundraising goal; it’s already on the eBook. It’s already in my InDesign files, for the paperback release. I’ll record it into the audiobook/podcast versions. (As soon as I get my new recording closet set up…) The license is actually almost vital to the plot of the story, itself; putting this book out with DRM, with all rights reserved, or really doing anything to try to stop or slow down sharing, remixing, and reusing it and its characters and ideas would be … ironic. At best. Idiotic, really.

Oh, and in case you really, actually can’t afford to pay even $5 for the Virtual Danger eBook, the free version will be available after Memorial Day, and I’ll be podcasting the audiobook for free all summer.

But, if you can afford to, would you consider becoming a Patron of Modern Evil Press? Would you take a moment, and a few dollars, and buy an eBook, a paperback, and perhaps a T-Shirt? I’d really appreciate it.